National Hope Day is celebrated on the first Wednesday in April which was the 7th of April in 2021. This year, the notion of hope is such a bright light that we want to celebrate its significance beyond just one day or one month.

‘Hope springs eternal in the human breast,’ wrote Alexander Pope in his poem "An Essay on Man."

But what is hope? 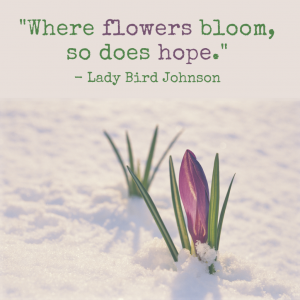 Merriam Webster’s defines it as: “A desire of some good, accompanied with at least a slight expectation of obtaining it, or a belief that it is obtainable.”

In simpler language, hope is the belief we hold during tough times that things will get better. Hope is both a verb and a noun. As a verb, it means to want, expect, anticipate or yearn. As a noun it suggests optimism, anticipation, possibility and promise. A more modern reference from Dictionary.com defines hope as a noun: “the feeling that what is wanted can be had or that events will turn out for the best”.

Why does it this matter more now than ever before?

COVID-19 has brought a renewed focus to hope. Global vaccine rollouts are bringing hope back. We use the word hope as a positive and affirming verb in daily conversation. I hope you had a good day. I hope things get better for you. I hope you find what you’re looking for. We hope to get back to a more “normal” life soon.

“In 2018, April was designated the National Month of Hope as part of a national awareness campaign by a non-profit group called Mothers in Crisis. Their goal was to encourage others to “think hope” and “make hope connections” in order to help families live drug-free lives. That hope campaign has grown and has become a powerful movement “of individuals joining forces and becoming citizens of hope in their own communities across the country.” This year’s slogan is “I would rather hope.”

On the Longwood Medical Campus, Countway Library celebrates hope daily. We are a library that connects everyone with resources, programs on diversity, wellness and mental health. With the newly renovated space, Countway Library is a sanctuary that brings hope and positivity to all who visit. Hope is a feeling that inspires us. Hope is not just a day or a month, it is a universal blessing. Countway Cares…bringing you Hope.

© 2023 by the President and Fellows of Harvard College