Catherine Pate July 9, 2013 Brigham and Women’s Hospital Archives Center for the History of Medicine
In 1963, Peter Bent Brigham Hospital (PBBH), a teaching hospital of Harvard Medical School and a parent hospital of the current incarnation, Brigham and Women’s Hospital (BWH), celebrated its 50th anniversary. One way staff marked the occasion was with a time capsule—a small box sent through time as a gift to the future celebrants of the hospital’s 100th anniversary. As they wished, the BWH Archivist, along with members of the BWH administrative staff and the trustee originally tasked with looking after the time capsule in 1963, opened it. Inside, we found a collection of objects and documents that capture their message of pride in the hospital’s achievements, and their great hopes for the future. 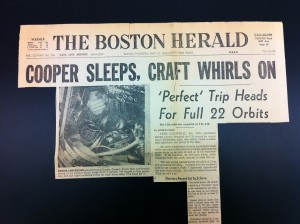 Reflecting the optimism of the new “space age”, the box included a newspaper clipping about astronaut Gordon Cooper’s May 1963 spaceflight, along with 50th anniversary celebration souvenirs saved from press articles, special scientific sessions, the opening of new facilities, award ceremonies, and alumni reunions. They also included a reel-to-reel tape recording of a hilarious satirical musical play by staff called “Through the Years.” 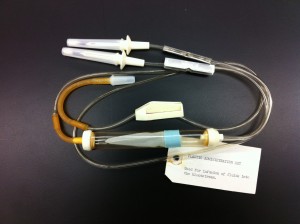 Several examples of new, leading-edge medical tools being used at the Brigham were packed in, too. There was a new plastic blood bag (invented at PBBH) which had recently replaced glass containers, a plastic syringe (disposable!) which had also replaced glass, a plastic administration set, a new type of dialysis catheter, as well as a gelfoam sponge used as a hemostat. 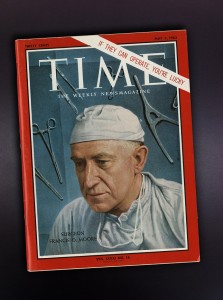 A signed copy of historian David McCord’s book about the hospital’s first 50 years titled, Fabrick of Man; a copy of Time magazine with a cover featuring Surgeon-in-Chief, Francis D. Moore, MD; the 49th PBBH Annual Report and the Report of the Friends of PBBH; as well as the 50th Anniversary edition of the Brigham Bulletin, immersed us in the life and concerns of the hospital in 1963. 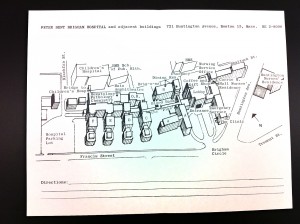 One huge preoccupation of the day was merger planning. In 1963, the project to unite several local hospitals with PBBH had already been underway for many years. This dream of merger wasn’t finalized until 1975, but they left us a map of the PBBH campus as it was in their day with hopes that by ours, the combined hospitals would be reflected in an expanded, ultramodern facility. (Completed in 1980 and still growing!) 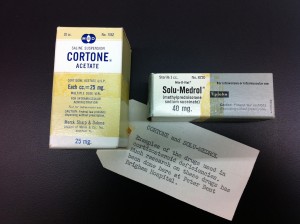 Another preoccupation was innovation. Having pioneered the field of transplantation with the world’s first successful kidney transplant in 1954, PBBH surgeons in 1963 were ready to attempt their first liver transplant. A team-based approach to breast cancer treatment and replacement parts to repair the heart also fascinated PBBH surgeons. They sent us, via time capsule, an X-ray of the first caged-ball valve implanted in a human heart. Researchers sent a Wall Street Journal article about new tests they had developed for the early detection of kidney and bladder cancer, and several drugs that they were experimenting with, including antibiotics, steroids, and hormones used for cancer therapy. 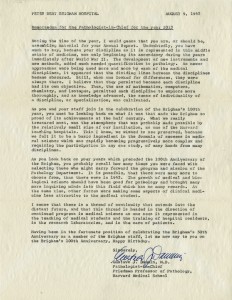 All of these items were fascinating, but the most exciting find in the 1963 time capsule was a ribbon-tied packet of personal letters from people in 1963 to be opened by their counterparts in 2013. The Chairman of the Board, President, Director, and Chiefs of Medicine, Surgery, Radiology, Pathology, and Urology all sent missives. 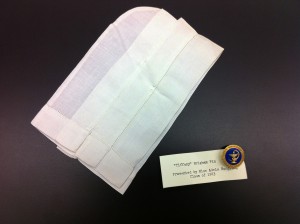 In 1963, the Director of Nursing and of the Peter Bent Brigham Hospital School of Nursing (1912–1985) was at the center of an evolution in the training of professional nurses. Along with her letter, she sent a copy of her speech accurately predicting the future of nursing education, as well as adding a PBBH nursing cap and a PBBHSoN graduation pin to the box.

Several others wrote letters too, for a total of 14 detailed glimpses into the minds and imaginations of hospital staff of 50 years ago. The reading of these letters 50 years later by the individuals to whom they were addressed was videotaped.

Some of our favorite quotes from the letters:

If you are in the neighborhood, drop in to the Brigham and Women’s Hospital. There is an exhibit of some of the above named time capsule items near the gift shop on the 2nd floor which will be on display throughout “Blueprint,” the hospital’s celebration of significant anniversaries of its parent hospitals in 2013 and 2014.

This news post was originally published on the Center for the History of Medicine’s Wordpress site.

© 2021 by the President and Fellows of Harvard College